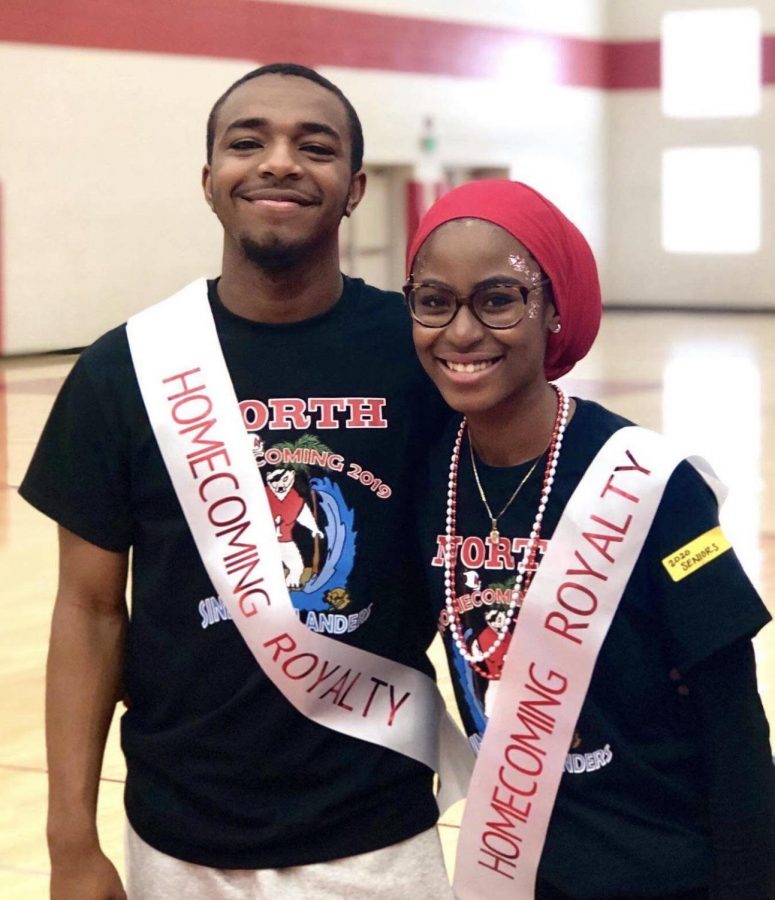 Dallas Williams & Aishat Adedayo pose for a photo together.

On Friday, September 20th, North High had their annual homecoming coronation. Dallas Williams and Aishat Adedayo were among the senior nominees. They would know in moments that they had won.

“We will miss all of it someday so I cherish every moment I have in school.” It is safe to say Dallas Williams, this years’ homecoming king has love for North High. Williams claims he didn’t even think he would win. “That was my first time being nominated so that was shocking to me” he says. Williams sets an example to other North students, probably because he has had someone who was a great example to him growing up. When asked who inspires him he says “My mom inspires me to do the best every day.” Williams detailed how his mother being single, going to college and growing up in a tough neighborhood are a couple of the many things that made her strong. “I’ve learned at a very young age to never give up on anything.”

We all have something we wish didn’t exist. That thing for Dallas is racism. “I feel like it’s the dumbest thing in the world. Just the thought of not liking someone because of their skin color outrages me.” Inclusivity and respect is important to Williams. If anyone knows anything about Dallas, it’s that he loves basketball. “I’m very passionate about basketball. Basketball has changed my life for the better and gets me through the tough times.” Williams hopes to carry basketball into his future as well. “I hope to become a professional basketball player overseas somewhere.” High school may be ending for Dallas, but he won’t be slowing down anytime soon.

“I was a little surprised and a little confused. It hadn’t fully hit me that I had won when I saw the ticket.” It took a couple seconds for senior homecoming queen, Aishat Adedayo to realize she even won. She was thinking she would lose. Aishat is someone many people in North High find to be kind and genuine. Aishat looks for the same in others. “People who are genuine when you first meet them tend to be more trustworthy and reliable.” She believes having someone you can’t trust is “very toxic and can be a heavy burden on my life.” Adedayo tends to focus on the positive side of things.

Some of the positive things Adedayo focuses on are her interests and passions.”I am very passionate about bringing the best out of people.” Adedayo enjoys helping people. Her goal is to “leave a positive impact on the school, helping other people makes me happy and content.” A lot of people also know that Aishat is passionate about art. “I love creating meaningful and expressive artwork because I think it is very inspiring, requires a different way of thinking, and it’s really just a release from all the stress of school and life.” Numerous of Adedayo’s creations have received awards and many positive reactions from fellow students. Aishat Adedayo is a leader everyone can look up to.