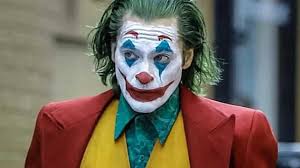 I’m taking a break from the usual, one review at a time format that I’ve developed so far, and I’m going to do a two in one. I decided to do this because after watching Todd Phillips’s Joker, I immediately went back and rewatched Christopher Nolan’s The Dark Knight.

The idea of this back to back viewing struck me about halfway through watching Joker, I figured it would be interesting to see The Dark Knight, but this time taking into account the backstory and downward spiral of Arthur Fleck (Joaquin Phoenix).

I suppose a little bit of background knowledge of Joker as a film would be helpful at this point.

The film centers around an extremely mentally ill man who is stuck in his low income caste, who takes care of and lives with his also mentally ill mother. The two live a pattern oriented life that slowly becomes more and more disrupted with unforeseen events.

It starts with Arthur being mugged while working as a sign twirling clown (contracted out from a business), after which, a friend of his gives him a gun to carry for self defense which falls out of his pocket while working a gig at a children’s hospital. He was then promptly fired. When being attacked again, this time on the subway while still in his clown makeup, Arthur shoots and kills three men who work on Wall Street.

This action accidentally started a political movement that sought to fight the severe separation of wealth among the citizens of Gotham City. The poor began to congregate in masses wearing clown masks or makeup in order to drive home the symbolism of their demonstrations.

I won’t give away any more spoilers, but I will say that more incidents like the one on the subway start to take place. With Arthur becoming unhinged and losing his grip on reality more and more, the lines between his delusions and actual plot developments begin to blur, until they are almost nonexistent. What Arthur believes to be true, the audience also believes is true.

This inherent distrust of reality as shown through Joaquin Phoenix’s utterly mind melting performance is not something most directors choose to do; often in fear of alienating audience members who don’t realize that the story is supposed to be told that way. A similar problem is faced by directors and writers who choose to tell their story with a nonlinear timeline.

With the lines of reality thoroughly blurred as Arthur devolved into the Joker, as well as the general, ever present sense of unease that surrounds both the character and his viewpoint, I was inspired to take a deep dive into another extremely wonderful adaptation of the Joker.

This was of course in Christopher Nolan’s The Dark Knight, an obvious classic amongst fans of superhero films, fans of the DC comics and fans of crime thrillers. The dark themes of madness vs sanity running parallel to the age old themes of good and evil built the perfect stage for the late Heath Ledger to perform on. The Dark Knight, in my opinion, is the best superhero film of all time, with just the right amounts of over the top violence and relationships, and real world problems that are faced in our everyday lives.

Ledger plays the Joker in his prime, when he’s at the top of his game and completely unhinged. In this era of Batman and the Joker, audiences felt like a part of Gotham City through equal parts escapism and moral conflict in the storyline.

Taking the principles of a slow descent into madness, as presented in Joker, as well as the opposite effect that violence has on the Joker’s psyche (he’s delighted by it rather than repulsed) into account, his actions in this film are not at all surprising. The Joker finds absolute joy in using the gangs of Gotham City to unravel the police department, district attorney’s office and Batman himself.

He doesn’t murder and terrorize to get anything out of it, he simply wants to feel the thrill of the game that he has currated for everyone living in Gotham City. A game that ends with no single person winning or losing.

On one hand, the Joker won: he turned Batman into a villain and corrupted the once morally sound DA. On the other hand, Batman won: he caught the bad guy, doing what was right for his city and saved the lives of thousands of people.

However, going back once again to Joker’s lack of a sound reality, there really is no way to say which side won; good or evil? madness or sanity?

This dilema haunted both Joker actors well after shooting had wrapped. Phoenix took an extended period of time out of the public eye in order to get back to being himself. Ledger, unfortunately was not able to get out of the Joker’s head and succumbed to drug use and an eventual overdose before post production was finished.

I’ve learned from watching performances like theirs or even films Reservoir Dogs and Pulp Fiction to never trust what is being told to you by the director and characters. Never take anything at face value, and that will lead you to a fuller understanding about what is really going on.

Well that was a long winded way of saying that both renditions of the Joker are iconic and the actors are both incredibly deserving of the Oscars earned for their efforts. Phoenix winning Best Leading Actor, and Ledger posthumously winning Best Supporting Actor. I know that this was a far cry from what I normally do here, but I felt the need to highlight the astounding work put into both films and the lasting mental and emotional effects felt by all those involved, including the audience.